skip to main | skip to sidebar

Reflections on the USMNT in Brazil 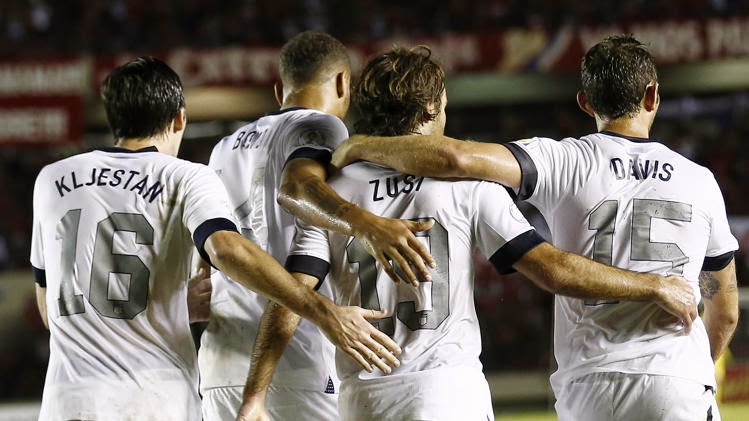 I'm a soccer fanatic now, but I haven't always been one.  Unique circumstances this summer allowed me to take my obsession to new heights as I watched almost all of the matches that were on offer for this World Cup.  It didn't hurt that this tournament has been full of emotion, comebacks, and heart. These are qualities that all people, not just Americans, love in sport.

I was following two teams at the start of the tournament: my native USA and my current home, France. But I'm not French and I was never going to live and die with Les Bleus as I would with Les Americains.  And as I "died" on the night of the 2-1 loss to Belgium, I ignored any immediate reflections of the media and instead jotted down my own thoughts after a couple days of pondering the matter.  What follows are the reflections of a realistic American fan of the beautiful game.

It's about the culture

The USA is an enormous country.  We have a large number of people playing soccer at every level across the country.  But it's a sport that gets lost among other national passions.  We aren't the only country with this problem.  Australians love Aussie Rules football (footy), rugby, and cricket.  Soccer is low in the pecking order.  But at least they often qualify to go to the World Cup.  India, that populous but cricket-mad country, has only qualified once (and they did so by default).  Need I mention Japan or America's northern neighbor, obsessed with baseball and hockey, respectively?

The countries that America played in this year's tournament are, unlike the countries mentioned above, obsessed with soccer.  This also means that they don't have the odd obstacles in place that Americans have - in particular the pay-to-play system at the youth level and the college system (we did a podcast on the latter some time ago which featured Matt Doyle from MLSSoccer.com).  These are endemic challenges and don't look like they will go away anytime soon.

People aren't just obsessed with playing soccer in those countries, they are obsessed with watching it, and it was fun, as an American, to watch the whole country care, if only fleetingly, about "our" game.

I am certain that this month some Americans are attending their first ever MLS, NASL, USLPRO, whatever, games.  That's great.  Some of us have always enjoyed soccer - others need a good introduction.  But fans, old and new, who are near the sport these days, when it's never been more popular or growing in our country, might mistake the passion and commitment from the fans as something that will translate into big results for our national team.  But we can't will a better culture. We have to create it.  Build it.  And culture - not just the soccer variety - takes time and patience. Americans aren't a patient sort.  We want it, and want it now, with a smile, if you don't mind.  At times, this has worked to our advantage.

On the 25th of May 1961, President John F. Kennedy gave a speech to a Joint Session of Congress in which he pledged to put a man on the moon by the end of the decade.  He would articulate his reasons again the following year, in September 1962 at Rice University (emphasis mine):


"Its hazards are hostile to us all. Its conquest deserves the best of all mankind, and its opportunity for peaceful cooperation may never come again. But why, some say, the moon? Why choose this as our goal? And they may well ask why climb the highest mountain? Why, 35 years ago, fly the Atlantic? We choose to go to the moon. We choose to go to the moon in this decade and do the other things, not because they are easy, but because they are hard, because that goal will serve to organize and measure the best of our energies and skills, because that challenge is one that we are willing to accept, one we are unwilling to postpone, and one which we intend to win, and the others, too.

Millions were inspired, and that culture produced the finest science environment the world has yet seen, particularly regarding space exploration.  It was a journey, surely, of ten thousand steps.  But that step on the moon began with this step of leadership that the President provided.

Our current USMNT coach, Jurgen Klinsmann, told us going into this tournament that we had no chance to win.  Some bleated their unhappiness at his sentiments, others chided, saying he was simply being "realistic."   Yet, can we truly say President Kennedy was being "realistic" when he said we were going to the moon?  No!  He had no idea how we would do it, what major changes would have to happen within the core of infrastructure of engineering and science in our country.  He uttered an inspiring challenge.  Inspired Americans accepted that challenge.  Is soccer nearly as important as exploring the heavens?  Probably not.  But the example of leadership to great goals through great vision is instructive.  The best, truest goals are never vague ("we are committed to getting better") but always specific ("we will win a World Cup by X date.").

If we want to be honest with ourselves, the Germans are the only reason America even made it out of the group stage.  Three crucial goals: the winner in the Ghana game, the momentum starter in the Portugal game, and the lone goal in the Belgium game were scored by John Anthony Brooks, Jermaine Jones, and Julian Green, respectively.  All Germans with American nationality who declared for the US rather than maybe never making the unbelievably deep and strong Die Nationalmannschaft.  Brooks and Green were surprise pulls due in large part to US Soccer's Technical Director - and current head coach - Jurgen Klinsmann - who is also, unsurprisingly with a name like that, German.  This doesn't bother me.

I was back in the States for July 4th, by chance, and I heard people say we were "founded" by England.  This is untrue on a number of levels.  America developed due to colonization efforts by the French, Spanish, English, and Dutch.  Oh, and there was a Native population here too.  Plenty of Germans found their way here in time.  Oddly enough, the reason Brooks and Green were born in Germany is our horribly outdated and irrelevant foreign policy (a topic for an entirely different piece) which is based around supporting America's biggest manufactured export: weapons and the conflicts to use them in.  But hey, if we can harvest some American fruit in Germany as a testament to all the Germans who have made America their new home, I say that's the beginning of a fair trade.

But, all joking aside, I do want to say that Brooks and Green (and Jones) and Aron Johansson (an Icelandic citizen we pried out of their system) all benefitted from the youth development culture in those countries.  If you accept globalization as a reality, you as an American won't get upset about this.  How many hundreds of thousands of foreign students enter American universities and graduate, only then to take those degrees back to their countries to build their lives?  Those countries, however successful they might be in other areas, have in a way, outsourced their higher education responsibilities to America. I think it's fair enough, for now, to outsource our youth development to countries like Deutschland.  It certainly worked in the cases mentioned above!

That hasthag occurred after the Belgium game.  It at once showed American impatience and stated valid frustration.  Is the United States one of the top 8 teams in the world?  No way.  But getting a quarterfinal berth would have meant exactly that.  We don't have the players, the tactics, the culture, or the belief to do so.  Yet.

There were a few podcasts that captured the mood of fans and believers well.  March to the Match had one of them.

Arjen Robben.  Vincent Kompany.  Yaya Toure.  Tomas Muller.  Franck Ribery.  Eden Hazard.  Oh, and yeah, Cristiano Ronaldo and Lionel Messi.  Those names strike wonder and fear into the hearts of their opponents.  America has ZERO such players, if we are honest with ourselves.  But teams who win championships in football have a minimum of 3-4 world-class players.  America has none.  Clint Dempsey changed teams (in a disgraceful way, I might add) in the Premier League ostensibly to play Champions League football (why he picked Spurs in order to achieve that goal I'll never understand) but then didn't progress there and ended up coming back to the biggest payday of his life back stateside. Jozy Altidore didn't impress in the BPL either.  And Michael Bradley, hope and pride of the USMNT, wasn't even a consistent starter at AS Roma before coming back stateside for an enormous paycheck.  I don't begrudge these men for taking the money, and more, it's got to be great to be an American playing in front of Americans.  But we don't have world-class players.  We have, at best, great players.  For now.

Being a USMNT fan at the World Cup is probably what everyone else feels like watching the Olympics.  We dominate so, so much.  And Americans expect to dominate.  We don't expect to ever stop dominating, ever.  Others who watch us must feel an admixture of admiration and despair at ever hoping to compete at our level.  Americans taste that feeling every four years when watching a World Cup.  I know I did this summer.

Americans get a lot of flack.  Living in Europe has put a lot of that into stark contrast for me. Americans get a lot of things wrong.  But we also do a lot of things really well, too.  And one thing I know about Americans is that if someone - anyone - put a goal in front of us - and we were inspired by that goal - and we worked towards that - let's say - a World Cup Final in 20 years - with landmarks at each cycle - we might just do it.  And failure would get us so much farther that we have progressed in the modern era.  But whining, having angst, and complaining?  Leave that to the European (read: English) football fans. They invented it.  Let's start being "realistic" by dreaming and being unrealistic first.  It's the only way the finest of goals are ever achieved.  Until that time, I won't let the big picture issues of the USMNT stop me from yelling and screaming in pure joy or slinking in sad astonishment, through all the ups and downs of our campaigns.  Because I'm a realistic US fan.  Who wishes, just once, that we weren't realistic.  So we would reach for the stars.